This semester, I was very lucky to be able to take part in a paper making workshop run by the director of the Combat Paper Project Drew Cameron. Combat Paper is a uniquely poetic and intensely inspiring project. The project was started by Drew himself about ten years ago. An Iraq war veteran, Drew emerged from the war seeking some means of voicing and reconciling his experiences. He found his outlet for expression in an unlikely place: a community college paper making class where he made the decision to cut up his Army uniform (or as he puts it "liberate the rag") and make the fiber into paper. 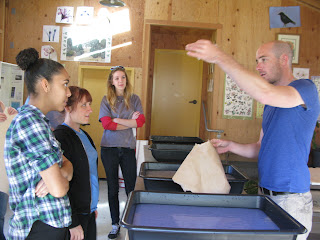 [Drew Cameron Director of The Combat Paper Project talking to Mills College students at the workshop]
Drew, an energetic and charismatic teacher, not only shared with us the history of paper making (short version: founded in China around 100 AD due to paper fibers washing up on the shore and creating sheets, transferred to Europe during the crusades, hasn't changed a whole lot since then with exception to the invention of industrialized machines such as the Hollander Beater which have sped up and perfected the process. I promise to give the long version in a later post on paper making!) but he also shared with us his own history. It was exciting to hear someone speak so passionately about a process that so many people neglect to consider regardless of what a large impact paper continues to have on our lives. Equally inspiring was how Drew managed to grow and support a project where not only he could share his own experiences in a completely new and unexpected way, but where he could encourage others to share their stories through similar processes.

[Combat paper makers "liberating the rag"]
Combat Paper today has locations and runs workshops throughout the country. The project encourages cross-generational communication and collaboration among veterans not only of the Iraq war but of previous wars such as Afghanistan and Vietnam as well. It also seeks to raise awareness about the realities of war, how war cannot affect a country independently of its impact on the individual. Combat Paper today has its own press and produces broadsides, artist's books, chapbooks, sculptures, prints, and original works of art. You can donate to the project here or contact them at their website to arrange a workshop!
Here is a particularly moving quote from Drew, as well as a small show case of Combat Paper's creations.
"The story of the fiber, the blood, sweat and tears, the months of hardship and brutal violence are held within those old uniforms. The uniforms often become inhabitants of closets or boxes in the attic. Reshaping that association of subordination, of warfare and service, into something collective and beautiful is our inspiration." - Drew Cameron

[Broadside print from the series "You Are Not My Enemy"]

Mirabelle Jones
Mirabelle Jones is a writer, performance artist, and book artist alternating between San Francisco and Berlin. View more of her work at Mirabellejones.com